This past January, we ventured out to the piney woods of east Texas, a place we haven't explored much of honestly, and parked the teardrop in Huntsville State Park for two nights. It was extremely rejuvenating, especially because the park was pretty empty while we were there. It was overcast and grey for pretty much the whole time. In fact, we left just before the first snow of winter hit Texas (the second one being the snowpocalypse in February). A really great friend of mine works at the park so we had ulterior motives for going since I also really wanted to see her and meet her kiddo!

Huntsville State Park is a gorgeous 2,000 acre park built in a large part by the Civilian Conservation Corp (aka CCC) in the 1930s. Work on the park took a hiatus during World War II, but began again in the 50s, with the park opening in 1956. Lake Raven is the most prominent feature of the park, and is a 210 acre man-made lake that is popular for fishing, swimming, and canoeing/kayaking. The park was much bigger than I thought, with 160 campsites!

Our site was 143 in Prairie Branch and was right on the water. It was set away from most of the other sites, except for one site right next door. I was really hoping to not have a neighbor since the park was so empty, but alas, someone pulled in shortly after we arrived. They were a nice, quiet, older couple, though, and had a friendly dog that Lily enjoyed petting. While this site wasn't as close to the bathrooms and we usually prefer, it was RIGHT next to the Prairie Branch trailhead. After setting up camp, we did a short hike, connecting the Prairie Branch trail to the Dogwood trail and then looping back around to the site.

The next morning before breakfast (but after caffeine), we hiked the full Prairie Branch loop trail. It's a really easy, short hike, half of which is along the water. It was a nice way to start the day. Afterwards, we cooked breakfast and sat and enjoyed the morning bird songs. In fact, as I sat in my camp chair with my feet propped up on my cooler, a warbler landed on my damn foot! I felt like Snow White, y'all.

Our last day there, we awoke to temperatures hovering just above freezing and a gorgeous layer of steam coming off of the lake. It was absolutely gorgeous. We met up with my pal and did lap after lap on the short Loblolly Trail right behind the Nature Center. It was perfect to let the kiddos run some energy off and we could meander with them and chat. Lily played so well with her daughter, despite the 5 year age difference.The two of them were cracking us up. We also stopped inside the Nature Center so Lily could touch the baby alligators! They have a partnership with Brazos Bend State Park where the young gators are raised at the park then released back at Brazos Bend when they are older.

Overall, we really enjoyed the park. It was lovely, well maintained, and quiet (though it does get very busy on weekends so don't expect quiet if you camp on a Saturday night). We are looking forward to returning soon! 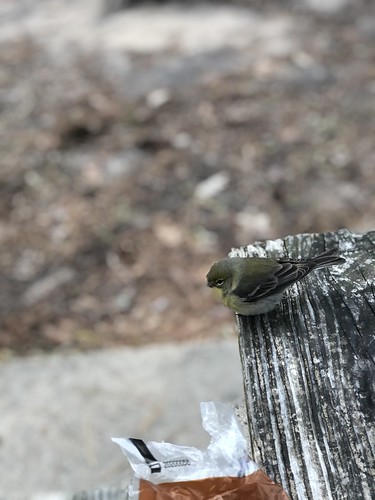