We spent a recent Friday evening at Old Tunnel State Park. The park is the smallest park in the state, at only 16 acres, and is located outside of Fredericksburg. It has a really cool mixture of history and nature - the tunnel is an old railroad tunnel, part of a track that went from Fredericksburg to San Antonio. The track was built when Fredericksburg lost the competition for the hub for the larger railway system that was being built through the Hill Country (Kerrville got it instead - rumor has it that the Kerrville folks got the Fredericksburg folks drunk the night before they were arguing their cases and they ultimately bombed it). The train transported livestock and passengers and apparently wasn't run very well, as the company went bankrupt twice. When World War II hit, the railroad was shut down and the metal was all salvaged for use. Once the trains were gone, the bats moved in. The state acquired the property in 1990 as a Wildlife Management Area and in 2012 it became a state park!

If you're planning on visiting Old Tunnel, here are a few tips to have the best experience you can!

The tunnel is just under 1,000 feet long and is home to about 3 million Mexican Free-tailed bats from the summer months into the early fall. Even though the emergences start in may, don't make the mistake that we did and WAIT! It's better to go in August/September for a couple of reasons. One - May is generally wetter than the later summer months. When there has been a good amount of rain, there are more bugs and the bats don't have to travel as far to eat so they emerge later. They emerged at about 8:50PM when we were there and it was damn hard to see them. Second - right now the mother bats have not had their pups. That happens in June-ish and it takes 6-8 weeks for the pups to be able to fly. Once they are able to, the number of bats emerging increases significantly, up to that high end of 3 million. We had about 1 million at the time of our visit (which is still a lot, but less than half of the peak!).

There are two ways to see the emergence - the Upper and Lower viewing areas. I recommend the lower area if you're able to coordinate that (you do need reservations for both - tickets can't be purchased on site). You're closer to the bats as they emerge and can see them better (especially if they emerge when it's really starting to get dark). You can even smell them!

If you reserve the lower viewing area, you'll also have access to the trails prior to the bat program. Lily and I got there about an hour and a half before the educational program was slated to start and we walked the short trail. It takes you down in front of the tunnel and then through the forested canyon area. It's nice, shaded, and it's actually a pretty good trail considering the park is so small and only has a staff of one (their volunteers are AMAAAZING and do a lot of maintenance and upkeep).

As with all things in nature, it can't be scheduled. You generally will have a good idea of about when the bats will emerge based on the times from previous days, but don't be surprised if they make you wait longer or if they come out early. They've come out when it's still broad daylight, when it's pitch black, in smaller groups, and in one big mass. Make your plans around the estimated time that is posted on the park's Facebook, but be prepared to possibly be twiddling your thumbs for a while. The educational program is great for passing the time and you can ask all of your burning bat questions while you wait.

If you're able to, I highly recommend grabbing dinner at Alamo Springs Cafe beforehand! They've got some of the best burgers in Texas. Unfortunately, they have limited hours right now due to lack of staff, but typically they are open through the evenings and are located right down the road from the park! 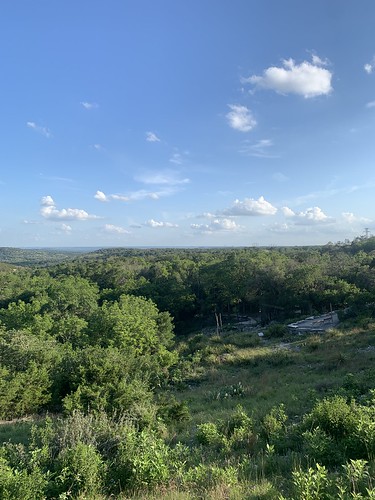 Have you seen any of the bat emergences in Texas before? Which is your favorite?