Our first stop of the second half of the road trip was Shenandoah National Park, located in the Appalachians (including the Blue Ridge Mountains) in Luray, Virginia. This area is so forested that the name 'Blue Ridge' comes from the haze that is created by all the plants photosynthesizing! It was gorgeous, duh. I mean, views, lush forests, and mountains.... it's hard to go wrong.

We had two days in Shenandoah and camped in Big Meadows. There is absolutely no way to see the park in two days. We were really only able to explore the area around Big Meadows and didn't have enough time to get much farther than that. The park is pretty stretched out. We entered at the northern Front Royal entrance station and it was still a 90 minute drive to Big Meadows, which is about halfway in on Skyline Drive. Since we didn't have nearly enough time, we had to pick and choose what to do with the time that we did have. Here are three great things to do while spending time in Shenandoah National Park!

With Lily being in school now and us having to travel during summers, we are getting to see waterfalls that we typically would miss out on with a visit in late fall. There are numerous waterfalls in the Big Meadows area. The first one we hit was Dark Hollow Falls. This was a perfect hike for us to do in the evening after we arrived. The trailhead was extremely close to the campground and it was a short hike at only 1.4 miles round trip. The hike takes you 3/4 of a mile down to the falls and is an out and back trail. The trek was relatively easy on the way down, with some areas getting slippery towards the bottom. The hike back up was a little bit of a climb but not too bad. One thing to note is that no pets are allowed on this trail!

The next day, we hiked the Rose River Trail, which is a 4 mile loop that takes you to Rose River Falls. This trail can be connected with the Dark Hollow Falls trail if desired. This trail is classified as moderate. I would lean toward the difficult end of 'moderate'. The entire second half of the loop is uphill and it sucked. It may have been worse for us because apparently we went the opposite direction than what is suggested (did not realize this until later) and we went down the fire road first... but damn it was quite a hike!

These are only two of many trails that will lead you to some magical waterfalls in the park!

We started our second day in the park with a hike up the Stony Man trail. This mountain gets its name from the rock formations at its peak. They appear to make up the face of a bearded man. You can try to use your imagination to see this from the Stony Man overlook on Skyline Drive.

This trail is only 1.6 miles round trip and is easy peasy. It's low effort for big reward because when you get to the top, daaaamn the view is beautiful. You can the Shenandoah Valley for miles.

Drive the entirety of Skyline Drive

Skyline Drive is the drive that goes from end to end through the heart of the park. It's 105 miles along the crest of the Blue Ridge Mountains and it's a gorgeous drive. There are a ton of overlooks along the road with pullout areas so you can safely hop out of your vehicle and take pictures of the dramatic scenery along the way. From top to bottom, the whole drive takes about three hours. There is gas in the park at Big Meadows so if you didn't top off before entering the park, you will have an opportunity to fuel up if needed about midway! We did the first half of the drive as we entered the park, then left through the southern portion so we got to see it all. There were wild turkey everywhere and cruising through the beautiful forests of the park was so, so lovely.

Shenandoah National Park has soooo much to offer and we only scratched the surface, but if you're really short on days in the park, you can't go wrong with these three itinerary items! Entry to Shenandoah National Park is $30 per vehicle, but I always recommend getting the America the Beautiful pass! It's $70 and can pay for itself in a single road trip. It covers your entrance fees for all National Parks and all other federal recreation sites! 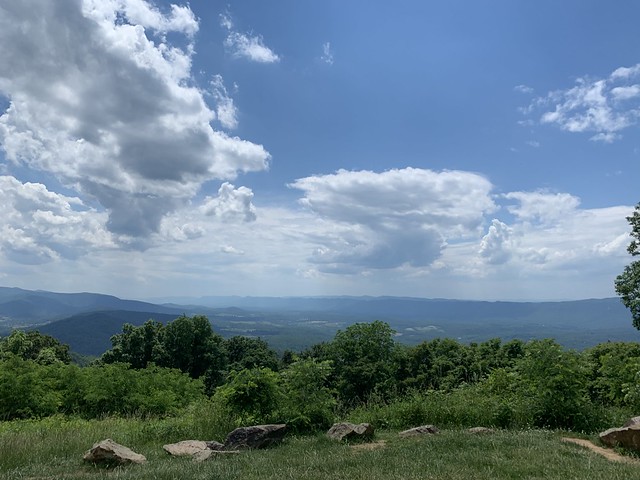