At the beginning of July, Lily had a doctor's appointment in Temple so we decided to make a camping weekend out of it. We picked Lake Whitney State Park, as it was only a little over an hour away from Temple and would be a relatively easy commute.

Lake Whitney is only about an hour away from DFW and is a 23,500 acre lake fed by the Brazos River. There are over 100 campsites in numerous camping loops the state park. We were in the Roadrunner Loop, which isn't really a loop at all but more just a road with a culdesac at the end. Our site was nice enough and actually had a shade shelter (something I have found a lot of sites don't have!). The shelter came in handy multiple times. First, there was pretty much zero other shade at our site. I found myself staring longingly at a site a couple sites down that had a huge oak tree and a ton of shade. Secondly, we ended up having a storm blow through and the shade came in handy to keep us somewhat dry. At least until we had to take cover from shitloads of lightning in a vehicle.

Since it is the middle of summer in Texas, we spent most of our weekend swimming. The first afternoon, we swam in the designated swimming area at the end of the park. The water was warm and felt like bathwater, but it was better than cooking in the sun. The next day, we decided to stay near our campsite and walk down to the lake area to give that a go. It was far superior to the swimming area. The water was cooler and clearer and it was more convenient. We stuck with this spot for the rest of the trip.

In addition to swimming, we also did a short hike on the Two Bridges trail. It was easy and gave us a chance to see the wooded areas of the park instead of just staying on the water. Of course, it ended up raining on us during the hike but we made the best of it!

Once we were back at the car, the rain was really coming down. We didn't want to pack up camp in the rain so we decided to participate in the scavenger hunt that the park had going on that weekend. We had a list of things that we had to locate and take our picture with. We found what we needed and went to HQ to receive our prize - Tootsie Pops. Womp womp. They are the worst type of candy in existence! But Lily enjoyed it.

Overall, I'd say our time at Lake Whitney was enjoyable, but I don't think we will be back anytime soon! The staff was great and the park is pretty, but in my opinion there is just better swimming in Texas, specifically even in the same area. No offense, Lake Whitney! 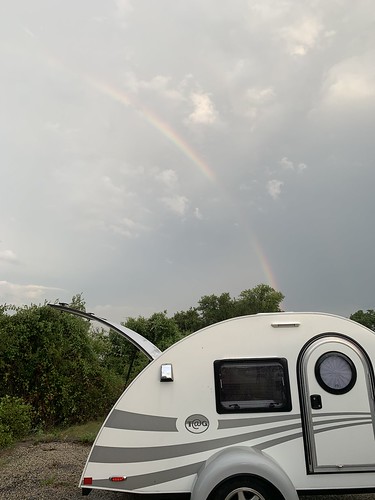