We spent the last weekend of August checking another park off our list - Lake Somerville State Park. Less than 2 hours away from both Austin and Houston, this park is a great option for a weekend getaway! Lake Somerville State Park actually has more than one unit - there is the Birch Creek unit at the northern end of the lake, the Nails Creek unit at the south, and the Trailway which connects the two. There is also a public hunting unit nearby. We stayed at Nails Creek in the Bent Tree camping area.

For a summer weekend, the park was unbelievably quiet. There were only a handful of other campers and next to no traffic on the roads. That made it perfect for bike riding! Bike riding is especially great in this park because because the park is so small - you can get everywhere easily via bike. The helpful front desk clerk recommend the Rocky Creek Day Use Area for swimming. That was the first place we headed when we arrived on Friday. The swimming was okay. It was pretty shallow and the water was warm so I felt like I was taking a bath, but we sat in the water for a while until it started to thunder.

What the park lacked in quality swimming, it made up for in quality hiking. Between the units, there are more than 40 miles of trails! It was really beautiful. The trails are very well designed and many times we felt like we were in the middle of nowhere, even though we weren't far from the developed areas. That was a really nice feature of the trail routes. The Somerville Trailway that connects the Birch Creek and Nails Creek units is about 13 miles long and has numerous backcountry camping sites along the way. We explored the trailway about three miles in and were very happy with our experience. We will absolutely be back to explore the backcountry more and do a couple of days of backpacking! I highly recommend hitting up this park for the excellent hiking.

Wildlife was abundant, which I am sure was aided by the fact that it was so quiet while we were there. We saw loads of White-tailed deer, bunnies, lots of birds, a couple of snakes, and a plethora of dragonflies and butterflies.This park is made for equestrian use and the campsites had very nice horse pens at them. Most of the trails in Nails Creek allow horses and they are allowed on the Trailway, as well. There is a small fishing pond located near the Cedar Creek camping area and you can borrow Loaner Tackle at Headquarters for free!

One thing to note is that the campground bathrooms are closed currently, but they have decent trailer restrooms/showers in place. The Bent Tree restroom trailer only offered toilets, but the Cedar Creek camping restroom set up also had showers. They weren't the best, but they did the job! Let's be real, we don't go camping expecting hotel-style bathrooms. Throw on a pair of flip flops and you'll be fine. The water is hot, the showers are private, and you'll be fresh and ready for your next adventure!

Overall, we really enjoyed our time at Lake Somerville! I hate to say that I was surprised, but I kind of was. I didn't go into the weekend thinking it was going to be crappy or anything, I just had never heard much about the park so I figured it'd just be average. It was definitely above average. We hiked pretty much all the trails + part of the trailway (putting in about 9 miles total for the weekend), rode bikes to our hearts' content, and lounged in the hammock enjoying the breeze and sunshine. Keep this park on your list - you won't regret it! 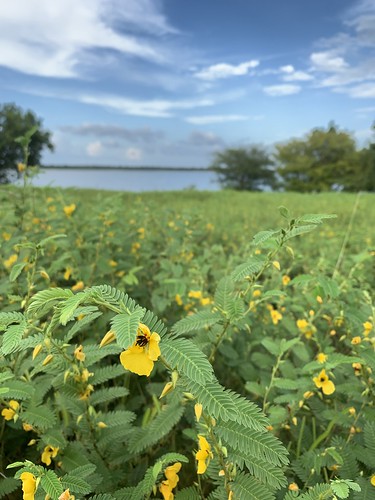