Our second stop in Arizona on our winter road trip was Petrified Forest National Park. Located outside of Holbrook in the northeast corner of the state, this park is exactly as it is named - a 'forest' of petrified wood scattered all over the damn place. Like.... ALL OVER. It is everywhere and there is sooooo much of it! 200 million-ish years ago, dead trees were washed into a river and created log jams. I think a volcano erupted, burying the wood under lava and ash and stuff, then - voila - petrified wood!

Not gonna lie, I don't really understand how it happens. For that, I would have to defer to my geologist brother, but stuff happens underground and the wood gets turned into quartz. Petrified Forest National Park is considered to be one of the largest concentrations of petrified wood in the entire world! So, needless to say, it's a pretty cool place.

We didn't have as much time to explore as I would have liked due to a flat tire from the previous day and needing to make an unscheduled trip to Discount Tire. We mostly played windshield tourist, but that's okay. There is no camping allowed in the park so we just went for a day visit.

The park has two entrances - the north and south. We started at the south end in the Rainbow Forest and worked our way north to the Painted Desert. Upon entering the park, we stopped at the visitor center to look around. Of course, Lily had to get some souvenirs so I bought her a tshirt and sticker (and somehow managed to lose the t-shirt before we ever made it back to Texas because it is MIA now). After the visitor center, we walked over to the trailhead for the Long Logs trail. It was cold AF but we were determined to get at least a short hike in! The Long Logs trail also includes the Agate House trail, which leads you to a small pueblo that was made entirely out of petrified wood about 700 years ago. Combined, the two trails make a 2.6 mile trail which ended up being the perfect distance, since the cold was a little unpleasant.

After hiking, we drove up through the park towards the Painted Desert. We stopped at a number of overlooks along the way and, when we reached the northern end of the park, we stopped at a picnic area and I busted out the grill and made a late breakfast for us since we hadn't eaten before heading out.

The park is beautiful and has a variety of geological attractions! If you're in the area, it's definitely worth a stop!

Chiricahua National Monument was our first stop in the state of Arizona on our winter road trip. It was stunning. The rock formations were so cool and it was a small enough park that we got to see a lot of it during our short stay there.

Chiricahua is located outside of Willcox, AZ and ranges from about 5,000 feet to 7,000 feet above sea level. It was chilly while we were that, that's for sure, but we had the right gear to be warm and cozy overnight in the tent. We camped in the Bonita Canyon Campground, which is the only campground in the park. It was fully booked while we were there so I was glad that I had made reservations in advance! We had the most eerie, still night of camping I think I have ever had in my life. Normally, the sound of the tent flapping, even very lightly, lulls me off to sleep. Here, though, nothing moved. It was so still and so quiet.

We didn't arrive until after dark so we had to hold off on exploring until the morning. We picked one hike to do since we only had a short amount of time. The Natural Bridge trail was our choice because it was a good length (4.8 miles) and it was listed as being the least used trail in the park. No people? Count me in!

It was a really beautiful hike that takes you up to the top of the canyon, back down the other side, then through the bottom to a viewing point for a natural bridge, carved through the years by water. It was a great hike to start the day and work up our appetite for breakfast!

Before leaving, we drove the 8 mile scenic drive to Massai Point, which was a beautiful overlook but it was fucking cold up there so I snapped a couple pictures and got back into the warmth of the car.

Chiricahua National Monument was up there at the top of our list of favorites from this trip & we will definitely try to get back again in the future to explore more of what it has to offer! 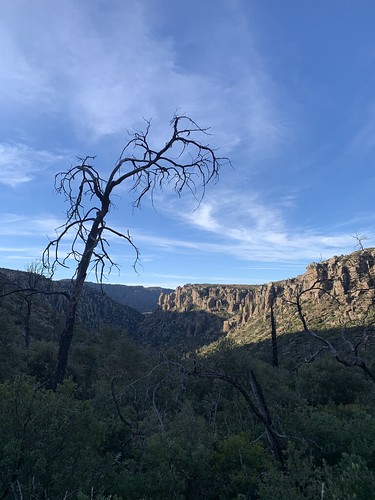 We were SO excited to finally plan a trip to some more Arizona National Parks! I have been wanting to bring Lily to Saguaro National Park for quite some time and, after the busyness of work and the holidays, I was looking forward to spending a little over a week in the desert. I wish we could have spent more time in the area, but we had to get back to school and work (boooo hisssss). We hit some new West Texas state parks along the way and explored some of the most iconic Arizona parks! Stay tuned for more details, but here is the basic itinerary as part of our Two Week Travels series (okay, okay, so this is only one week but sshhhhhh)!

With school letting out for summer in a couple of weeks, road trip season is approaching. Especially with COVID restrictions lessening little by little as more and more people get vaccinated, things are opening up and our options are widening. I think we are all ready to start getting back to some level or normalcy again.

If you're ready for a road trip but aren't sure where to go this summer, you can't go wrong with Utah. The whole state is like a big outdoor playground. We visited in October 2018 and hit the Utah Big Five + more in 11 days. Here was our route, which started and ended in Salt Lake City (we got our flights super cheap in and out of Austin-Bergstrom).