With October in full swing, I am reminiscing about the many fall trips we've taken. Utah, Colorado, New England, and, most recently, California. We spent about a week and half exploring some of California's National Parks shortly before COVID-19 became a thing. Our route took us in a big misshapen circle, hitting five parks (and spending Thanksgiving in Pasadena). Instead of heading back towards LA after Death Valley, you could easily pop over to Joshua Tree and then sub in Channel Island National Park for time spent in LA!

The holiday season has been a whirlwind. A week before Thanksgiving, Lily and I hopped a plane to LA. It had been 9 years since I'd been to California - the last time being when my college pals & I road tripped out there the summer after graduating. Needless to say, I was overdue for a visit.

We spent the night in Austin and headed to the airport at the crack of dawn the following morning. The trip started off kind of hectic and crappy, with our flights getting delayed repeatedly. By the time we finally made it to LA, we were four hours behind schedule and still faced a 5ish hour drive to Yosemite National Park. Since it gets dark so damn early there and we'd be fighting the daylight, we opted to spend the first night in Pasadena with Ben & Rebekah instead of in Yosemite. It ended up being a good choice - we got to catch up, drink a couple of beers, and relax after the stress of travel.

We woke up early the next morning and bid our farewells to them until Thanksgiving and off we went, headed north to one of the most iconic National Parks in the country. The drive was long and not terribly scenic, but after almost six hours in the car, we had arrived and I was just flabbergasted at how beautiful it was. It took us a while to get from the park entrance down to our campsite in Yosemite Valley, but god damn the views were amazing.

Once we got camp set up, we headed to the store down the way and got some firewood and supplies (read: local beer and snacks), then made dinner at the campsite. We played some games as we sat by the fire, and by 5:30pm Lily was in the tent. I stayed up for a bit, reading Desert Solitude by lantern light, then it was lights out for me, as well. The following day would be busy - we had to pack in as much of Yosemite as we could with the shortened amount of time that we had!

After breakfast, we hiked the Lower Yosemite Falls trail. The falls were dry, but the landscape was still stunning. The fucking rocks were SO BIG. I swear, every place I go I end up amazed at the rocks. After that, we hiked to the Vernal Falls Footbridge on the Mist Trail. We contemplated continuing on to the top of Vernal Fall, but we were getting close to check-out time and still had to pack up camp.

Once camp was clear, we hopped in the car to slowly begin making our way out of the park. On our way out of the valley, we stopped and did the short hike to Bridalveil Fall, which WAS actually flowing so it was nice to see an actual waterfall. From there, we drove the scenic Glacier Point Road up to the overlook. Wowwie. Lily was obsessed with Half Dome. We stood up there for quite a while, just staring out into the vast wilderness.

From there, we continued on back out of the park and set our sights on our next destination - Three Rivers, CA and Kings Canyon/Sequoia National Parks. 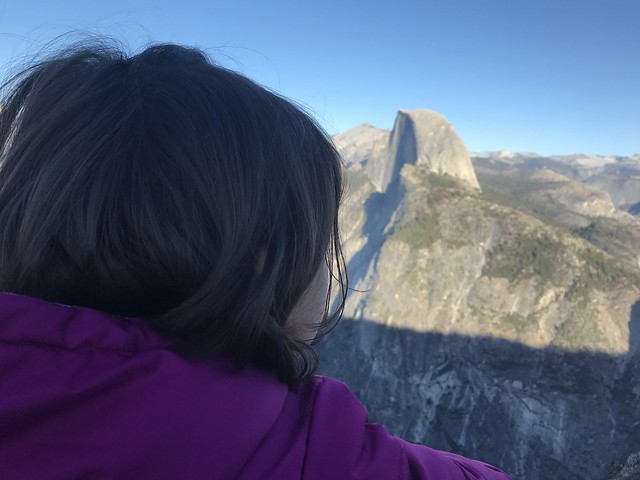