Our last, but absolutely not least, stop on our trip was Caddo Lake State Park in Karnack, Texas (home of Lady Bird Johnson!). Caddo Lake is the only natural lake in the state of Texas. That's crazy right? ALL the other lakes in Texas, ALL OF THEM, are man made. Blows my mind.

Caddo Lake has been on my must-see list for a long time because it just looks so magical and mystical in pictures. The Spanish moss hanging off of the bald cypress trees growing throughout this 26,000+ acre lake just looks like a dream.

We decided to end the trip with a splurge and stayed in one of the cabins. We stayed in Cabin 1 and it was really awesome. The CCC built the cabins, along with other structures in the park, in the 1930s. The cabin had a perfect front porch, complete with chairs and a bench. It's made of a combination of rock and log and is really beautiful. The inside is pretty plain - a small dining table, kitchen area, sofa, two bedrooms, and a bathroom. No linens or kitchenware are provided, which was fine because we had all that stuff with us anyways! Our only complaint was that there was no fire pit, but we ended up doing s'mores on the grill instead. Overall, I highly recommend these cabins!

Caddo Lake is pretty swampy and, at least in the state park, most people don't swim. We did some googling, though, and discovered that there was a local park right across the border in Louisiana that was more suitable for swimming. We made the short drive to Earl G. Williamson Park in Oil City, LA . It was still not great swimming, but it was enough to cool us off. It became pretty clear that the best way to see the lake would be on boat.

We quickly booked a sunset cruise with Big Cypress Tours, headed back to the cabin for a quick change of clothes, then headed to the boat. We toured the lake as the sun went down while our guide shared lots of information, history, and folklore about the area. It was just stunning. It really is a magical place.

The next day, we contacted a friend of a friend and were able to book a private boat tour with him for the entire morning. He brought us ALL over the lake, including to a cool little secret swimming spot where the kids got out and played. We covered a lot of ground (err.. water?) in the hours on the lake and it was all just incredible. It is just gorgeous. I can't say that enough!

If you're planning a visit to Caddo Lake, my best recommendation would be to get out on the water to really get the full experience. Do a boat tour, go kayaking or canoeing, whatever - you just don't get the full vibe from the shoreline. You HAVE to get out there into this magical water forest fairy-tale land. 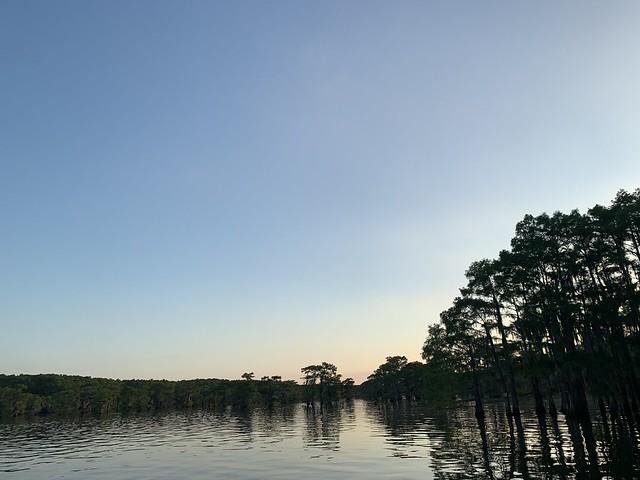